Thanks to everyone who loved our first stupid little game, we are now making a second stupider, not-so little game. Goat Simulator 3 launches on Xbox Series X/S this fall, and I’d be lying if I told you everyone at Coffee Stain wasn’t very excited.

Sure, you’d be better off spending your time playing (or doing) anything else. But for those among you who prefer to spend your time pretending to be farmyard animals with your friends, we truly have some top-tier nonsense in store for you.

First, allow me to introduce San Angora, Goat Simulator 3’s huge new sandbox island. Lush beaches, towering cities, and pure chaos await you. The island offers delightful exploration on foot or by vehicle, hidden secrets to find, quests to complete and absolutely tons of stuff for you to destroy. Goat Simulator has a legacy, and we’ll be damned if we don’t stick to it.

But what fun would this new island be without friends to explore it with? In Goat Simulator 3, you’ll be able to roam the world in four-player co-op, having adventures, causing mayhem, and competing in silly minigames. On top of that, we’ve got loads of NPCs for you to mess with too – some will spawn from various events taking place, others might try to sell you ice cream on the street. Take that, loneliness.

Now, it might sound a little blasphemous to say, but you don’t actually have to play as a normal goat in this one. Of course, we’re bringing Pilgor back as the main character, how could we not? But if you fancy switching it up, you can dress up as loads of other things – tall goats, stripey goats, tasty goats, and more. You can also fully customize your goat to equip hundreds of different items – from toilet rolls to tea trays… and actual clothing items, if you want to be like that.

Ultimately, Goat Simulator 3 has everything you love from the first game, mashed together with a load of new features in a shiny new location. You’ll still be licking, headbutting, exploding and crashing your way around, all while testing the limits of the world’s physics and interacting with things you probably shouldn’t be able to. The sequel is even less broken than the original too (we hope)! But importantly: it’s equally as daft. As a final note, I’d like to thank every fan of Goat Simulator for the level of support you’ve shown us since the original game launched in 2014, from streamers to memers, and beyond. Your love for goats is truly unrivalled (except maybe by us), and we can’t wait to share with you the new weird and wonderful world we’ve made in Goat Simulator 3 this fall. 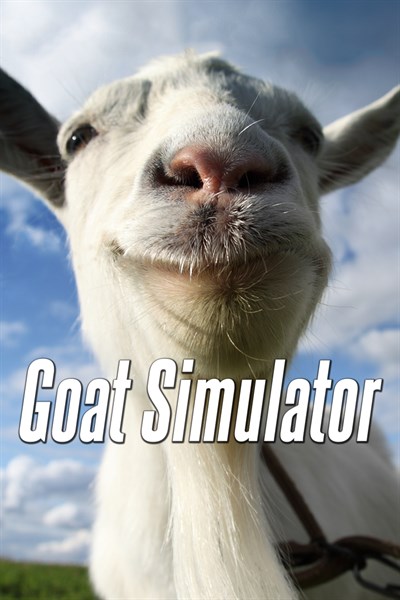 Gameplay-wise, Goat Simulator is all about causing as much destruction as you possibly can as a goat. It has been compared to an old-school skating game, except instead of being a skater, you’re a goat, and instead of doing tricks, you wreck stuff. Destroy things with style, such as doing a backflip while headbutting a bucket through a window, and you’ll earn even more points! When it comes to goats, not even the sky is the limit, as you can probably just bug through it and crash the game.

Disclaimer
Goat Simulator is a completely stupid game and, to be honest, you should probably spend your money on something else, such as a hula hoop, a pile of bricks, or maybe pool your money together with your friends and buy a real goat.

Key Features
• You can be a goat
• Get points for wrecking stuff – brag to your friends that you’re the alpha goat
• MILLIONS OF BUGS! We’re only eliminating the crash-bugs, everything else is hilarious and we’re keeping it
• In-game physics that bug out all the time
• Seriously look at that goat’s neck
• You can be a goat